They say that imitation is the best form of flattery, and whoever “they” are, they could be right!

For the second time in the past month, Facebook have followed in the footsteps of their arch enemies in the social space (Twitter) and introduced hashtags (#) to help users find conversations and stories.

One of my pet hates about Facebook is seeing friends use hashtags, for no apparent reason, other than to mimic their style of post on Twitter. But now, Facebook hashtags will be both clickable and searchable – so, I’ll have to bury the hatchet with that gripe!

Facebook wants to make it easier for users to find content, and having seen how well hashtags work in the Twitter-sphere, the social giants are set to roll out functional hashtags over the coming weeks.

Facebook users will now be able to group comments on the same topic by typing the hashtag alongside a keyword – such as #dating. 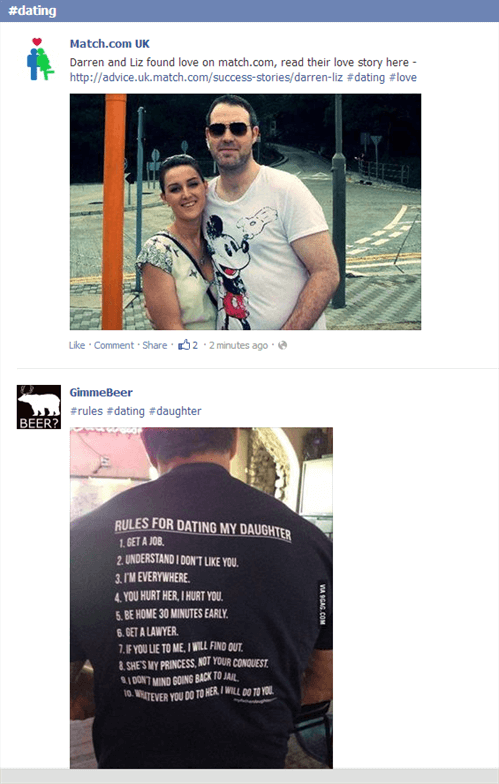 Who else uses hashtags?

Facebook aren’t the only ones to jump on the #bandwagon.

What does this mean for your brand?

If your brand is on Twitter, it’s likely that you already use hashtags, whether it’s to align yourself with trending topics or to promote an event, eg: #SkyfallPremiere.

Until now, Facebook has been missing an opportunity to help users engage with what others are “talking about”.

“Hashtagging” will provide an easier way for your brand to reach a particular audience. Popular topics will now surface in the search results, so it’s important that your brand piggy-backs on relevant conversations.

You can also promote your own hashtag, to give yourself both a voice and more reach and visibility in the social space.

How do you make your hashtag clickable?

To date, Facebook has only rolled out functional hashtags to 20% of its users, but the global launch is expected to occur over the next few weeks.

So, if your #’s aren’t clickable yet, they soon will be.