Why I switched to digital marketing 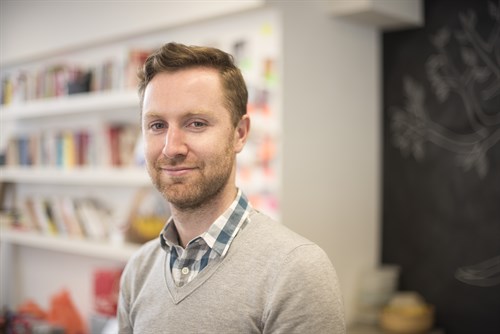 As a director at atom42, Paul Egan is in charge of strategy for most of our clients, mentoring our team managers, and generally running the company with our founder.

But Paul hasn’t always worked in online marketing. In fact, he used to have an entirely different career, as a sound engineer. Here’s Paul’s story:

Being a sound engineer

“On paper, I used to have the sort of career that most people would dream about. I was a sound engineer. I was recording, mixing, mastering, writing, arranging, performing, producing – all the things that I needed to be good at to become a legendary producer.

“But being a sound engineer was a tough life. As time wore on, the 80-hour weeks, night work, weekend work, not seeing my family or girlfriend, and low pay, really took their toll. I stuck it out for two years, but by then I was totally allergic to the idea of having a career in music.

“I couldn’t even listen to it any more – after a 12-hour day of listening intently to the same drum track over and over again, the last thing you want to do is stick a CD on.

How I changed careers

“My career change actually happened in two parts. The first was a migration from music to online marketing when the studio manager came up with an interesting business idea.

“Quite often, I’d mix a band’s album and they’d ask me where they could get a thousand copies made, with cases, printed covers, etc, so the studio manager and I bought a duplication machine and printer. I was recording the bands and then I’d send them next door to him to get their CDs burnt and printed.

“When I eventually left the studio, our customer stream had dried up, so I built a website. But the website had no traffic, so we then had to learn SEO to get some! I remember our first customer paying us £250 to get a hundred CDs made. It was such a strange feeling to be sent a cheque by someone I’d never met!

“Things then got more advanced – I learned how to code using PHP and MySQL, and learned a bit about pay-per-click (PPC). But gradually people stopped buying CDs and the economy had also taken a downturn.

“This was the second change – from running my own business to working for an online marketing agency. I was dreading working for someone else after having been my own boss for six years, but eventually financial constraints forced my hand. I worked out the exact date that my money would run out. I started my job at atom42 on that very day.

Why the change worked so well

“At atom42 I’ve found my niche. I’ve focused on getting really good at my job, which has meant that I’ve risen to the top and gained the autonomy I had when working for myself.

“It’s also been massively advantageous to have worked for myself prior to working for atom42, because I know what it’s like to be the client. I can put myself in their shoes because I’ve been there myself. And I’ve understood the needs of atom42 from day one, which has expedited my rise to director.

Overcoming concerns about the change

“I was initially worried about making the shift in habits, from waking up at 10 a.m. and working in my boxer shorts to being in the office at 8.30 a.m. and presenting to clients, but it was actually really easy. I loved the thought of coming to work each day, because the work was so interesting and the people were so welcoming. They immediately became close friends and I looked forward to seeing them each day.

“The most difficult thing about changing was having to learn very quickly and become an expert so that my new clients would have faith in me. I had to learn many new skills, particularly people skills, and generate results. It was a steep learning curve and took me about six months to fill in the gaps in my knowledge and experience.

What I’ve learned about careers

“I’ve learned that it doesn’t matter if you don’t start out on the right track. You can make small sideways / diagonal steps to find your niche. In fact, your experience and knowledge will be broader than your peers as a result of working in different fields.”